In addition to holistic family medicine, Pinewood Medical offers the services of our board-certified, in-office endocrinologist, Dr. Eric Tay, who provides specialized care in the diagnosis and treatment of diabetes, thyroid disease and other hormonal or endocrinology problems. As an endocrinologist, he treats symptoms and disease that arise due to problems with hormones or glands. 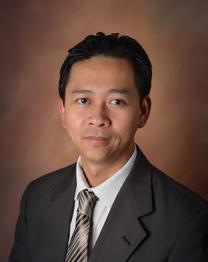 Chhay (Eric) Tay, MD, ECNU graduated from the Medical College of Wisconsin where he completed his medical school and later on did his internal medicine residency.  He did his fellowship in endocrinology, diabetes & metabolism at the University of Texas Health Science Center at San Antonio.  Dr. Tay is board certified in endocrinology and was previously an assistant professor of medicine.  He previously served as the medical director of the diabetes education program at Kingwood Medical Center.  Dr. Tay has given many lectures at medical conferences in the field of endocrinology & diabetes. He was involved in research and has authored and co-authored various articles appearing in peer reviewed medical journals.

Dr. Tay has ECNU certification (Endocrine Certification in Neck Ultrasound) by the American Association of Clinical Endocrinologists (AACE).  He has performed numerous thyroid/neck ultrasound and ultrasound-guided needle biopsy of thyroid nodules, lymph nodes in the neck and neck masses.  Dr. Tay has been involved in educating the community and has given many lectures throughout the years to the community in diabetes and endocrinology.  He has been practicing in the field of endocrinology & diabetes since 2004.  In his free time, Dr. Tay enjoys running, playing basketball, table tennis, spending time with his family and watching movies.

“A Pain in the Neck:  What you don’t know about thyroid disorders could hurt you.”Eric Tay, M.D.  Austin American Statesman February 2007.